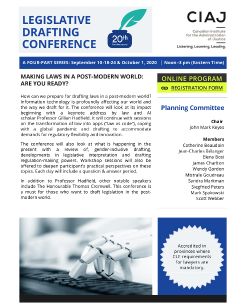 Program accredited in provinces where CLE requirements for lawyers are mandatory.

***Some technical problems occurred during the live broadcasts. The video prices have been revised accordingly***

Scroll down to see the videos

Related PowerPoint presentations and papers are available in the library under "documentation." 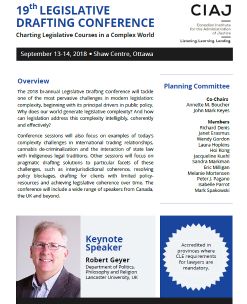 The 2018 bi-annual Legislative Drafting Conference will tackle one of the most pervasive challenges in modern legislation: complexity, beginning with its principal drivers in public policy. Why does our world generate legislative complexity? And how can legislation address this complexity intelligibly, coherently and effectively?

Conference sessions will also focus on examples of today’s complexity challenges in international trading relationships, cannabis de-criminalization and the interaction of state law with indigenous legal traditions. Other sessions will focus on pragmatic drafting solutions to particular facets of these challenges, such as interjurisdictional coherence, resolving policy blockages, drafting for clients with limited policy-resources and achieving legislative coherence over time. The conference will include a wide range of speakers from Canada, the UK and beyond.

Legalizing and Regulating Cannabis in Canada: Incremental or Radical Change? (1:14:33)

The Implications of Complexity Thinking: Where Do We Go from Here? (41:43)

2016 | The New Legislative Counsel: At the Intersection of Law, Policy and Politics 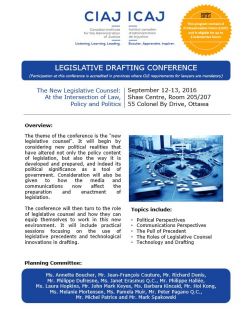 The theme of the conference is the "new legislative counsel". It will begin by considering new political realities that have altered not only the policy content of legislation, but also the way it is developed and prepared, and indeed its political significance as a tool of government. Consideration will also be given to how the media and communications now affect the preparation and enactment of legislation.

The conference will then turn to the role of legislative counsel and how they can equip themselves to work in this new environment. It will include practical sessions focusing on the use of legislative precedents and technological innovations in drafting.

The Pull of Precedent (Plenary Discussion) (35:30)

Directing Traffic at the Intersection of Law, Policy and Politics (Plenary Discussion) (31:53) 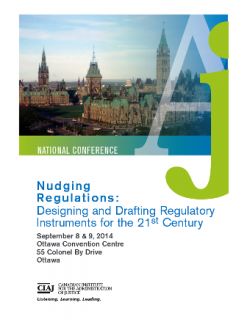 This conference is organized by the CIAJ Legislative Drafting Committee chaired by John Mark Keyes, former Chief Legislative Counsel of Canada. The conference will address a variety of current issues relating to the use and making of regulatory instruments. It will begin by considering how the concept of “nudging” is changing the regulatory landscape by focusing on prompting behavioural changes rather than dictating conduct through legally binding rules. The conference will also look at many important and developing facets of regulatory instruments, including public engagement in regulatory development, drafting questions, incorporation by reference of standards, public access to legislation and parliamentary review of regulation-making. An update on recent case law relating to regulatory instruments will also be provided as well as an address by Mr. Justice Cromwell of the Supreme Court of Canada on Access to Law.

Incorporation by Reference as a Modern Regulatory Technique: Benefits and Burdens (1:50)

Workshops - English Session - Drafting for a Good Fit Between Statutes and Regulations (1:06) 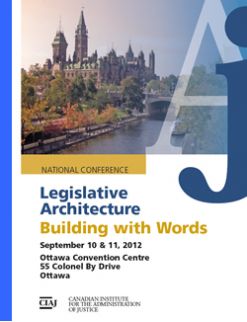 This conference is organized by the CIAJ Legislative Drafting Committee co-chaired by Ms. Judith Keating, Q.C., Deputy Minister of Justice and Attorney General of New Brunswick and John Mark Keyes, Chief Legislative Counsel of Canada. The conference will examine the general structure of legislative systems, including the interplay of different forms of legislation with other regulatory instruments as well as regulatory reform and legislative revision. It will also include updates on recent case law on legislative matters,the impact of international accessibility standards on the publication of legislation and workshops on practical aspects such as ethical issues for legislative counsel and drafting provisions authorizing the making of delegated legislation or governing the commencement of legislation.

Cleaning Up The Statute Book - Panelists - Kimberly A. Poffenroth (35:44) 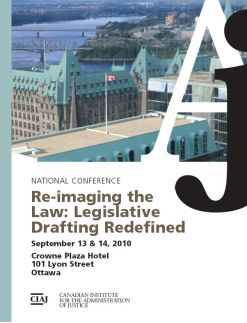 This conference is organized by the CIAJ Legislative Drafting Committee chaired by Ms Judith Keating, Q.C., the Chief Legislative Counsel of New Brunswick. It will focus on how the evolving legal concepts of a diverse community are redefining legislative drafting. Those entrusted with preparing draft legislation bring specialized knowledge and understanding to their creation.  In response to a growing environment, they are further called upon to integrate the new and broader concepts of an evolving global community.

Within that context, particular topics will examine the value and contributions of the legislative drafter to the intricate fabric of legislation; the professional and ethical dimensions of the drafter within a modern, complex work environment; the evolving legal, cultural and language issues that must be considered and integrated into legislation and how they are redefining the way we draft. The conference will also include workshops dealing with practical drafting issues as they relate to English, French and Aboriginal languages.

Conference participants can expect to come away with a better understanding of how legislation is being redefined in broad terms to adapt to an ever changing environment and how the drafting profession is responding to re-imaging of the law.

TUESDAY, SEPTEMBER 14, 2010 - Re-Imaging the Law Through the Harmonization of Legal Regimes and Concepts - Introduction - Pierre Charbonneau (06:03)

Re-Imaging the Law Through the Harmonization of Legal Regimes and Concepts - Panelists - Frédérique Sabourin (19:21)

Re-Imaging the Law Through the Harmonization of Legal Regimes and Concepts - Panelists - Edwin E. Smith (20:03) 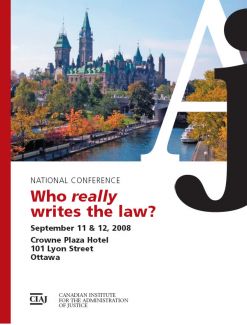 This conference organized by the CIAJ Legislative Drafting Committee, chaired by Mr. John Mark Keyes, Chief Legislative Counsel of Canada, will focus on the intersecting roles of those involved in determining the wording of legislative texts (statutes and regulations). This group most obviously includes legislative drafters whose task is to turn drafting instructions into text. But it also includes those responsible for developing drafting instructions and their underlying policy, whether acting within government or parliamentary institutions as policy officials or legal advisers, or outside these institutions on behalf of interest groups. Draft texts are also often further processed by yet another constituency that includes translators, editors, jurilinguists and bijuralists. Finally, parliamentarians and subordinate legislative authorities are involved in writing, reviewing, amending and adopting draft texts that are presented to them.

The multiplicity of participants in law-making processes poses the question that forms the title of the conference: who really writes the law? What are the distinctive roles of these participants? Are there overlaps or conflicts? Are these roles evolving in response to changes in the political culture or environment for law-making? The conference speakers will consider these questions and more. Conference participants can expect to come away with a better understanding of the legislative landscape and, if not a definitive answer to the main question, at least a point of view.

Building Accessibility for People with Disabilities into our Legislation: Avoiding the Creation of Unintended Barriers - Introduction - Mark Audcent (06:21)

Building Accessibility for People with Disabilities into our Legislation: Avoiding the Creation of Unintended Barriers - Speakers - David Lepofsky (36:07)

Building Accessibility for People with Disabilities into our Legislation: Avoiding the Creation of Unintended Barriers - Speakers - Professor Randal Graham (06:36)

From Drafting Instructions to Judicial Decisions and Back Again - Introduction: John Mark Keyes (05:33)

From Drafting Instructions to Judicial Decisions and Back Again - Speakers - Justice Richard Mosley (35:02)

From Drafting Instructions to Judicial Decisions and Back Again - Discussion (31:34)