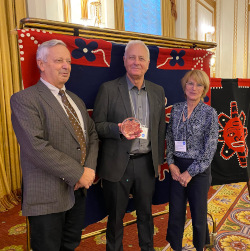 It is with great enthusiasm that CIAJ’s New President, the Honourable Justice P. Colleen Suche, presented the 2021 President’s Award to Mark Benton, QC, joined by CIAJ’s Past President, the Honourable Justice James W. O’Reilly, at our 45th Annual Conference on Indigenous Peoples and the Law in Vancouver. Congratulations! Mark has been a lawyer since 1980 and has served as the CEO of Legal Aid BC since 2002. He was a very active, efficient and much appreciated Board Member for three terms, from 2015 to 2021.

In 2016, CIAJ established the President’s Award to highlight the exceptional contribution of one of its volunteers. The work of CIAJ volunteers is essential to achieve CIAJ’s mission and reach its objectives. The first President’s Award was presented at CIAJ’s Annual Conference held in October 2016, in Ottawa. The Award will be given every other year, alternately with the Justice Medal.

CIAJ’s Executive Committee selects the recipient. The Committee reserves the right not to confer the President’s Award.

Montreal, October 13, 2016 – The Canadian Institute for the Administration of Justice (CIAJ) establishes the President’s Award to highlight the exceptional contribution of one of its volunteers. The Award was given for the first time at CIAJ’s Annual Conference, which took place in Ottawa from October 5 to 7, to Mr. John Mark Keyes. “John Mark is a natural leader. He is prepared to debate each issue of importance to make sure we get it right. […] He is a worthy recipient of the first President’s Award!” said the Honourable Justice Georgina R. Jackson, from the Court of appeal for Saskatchewan and President of CIAJ. 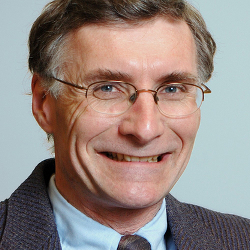 About John Mark Keyes
John Mark Keyes is a sessional professor at the Faculty of Law, University of Ottawa – Common Law Section, teaching mainly in the field of public law and legislation. He is also an instructor with Athabasca University in its Post-Baccalaureate Diploma in Legislative Drafting Program. He was employed in the Department of Justice (Canada), first in the Privy Council Office Section examining draft regulations, then moving to the Legislation Section to draft government bills. From 1999, he worked in various managerial positions in the Legislative Services Branch and was the Chief Legislative Counsel (Assistant Deputy Minister Responsible for Legislative Services) from 2005 until 2013. 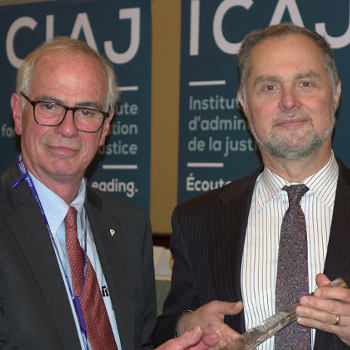 It is with great enthusiasm that CIAJ’s President, Patrick A. Molinari, A.d. E., FRSC (left), presented the 2018 President’s Award to the Chief of the Commission and Tribunals of the Alberta Human Rights Commission, Mr. Michael Gottheil, at our 43rd Annual Conference on Justice and Mental Health, in Ottawa. Congratulations!