Part 2: And That Emoji, How Do You Write It?

In Part 1, one could read, “For those peppering their text messaging with them, emojis are small pictograms used as an illustration or to express an emotion.”

For a computer system, however, an emoji is one of many characters. Like a letter, a number, a dash or an ampersand, an emoji is merely the expression of a coding, systematized by an international organization called the Unicode Consortium which assigns each a code point and a description.[2] From there, developers are free as to the graphic rendition of this coding, provided that the characters are readable from one platform to another. This graphical liberty means that, though very similar from one platform to another:

emojis are nonetheless not identical and may present stronger variations in certain instances:

It is therefore possible that an emoji sent from a given platform does not quite match the emoji received on another platform and therefore, that the message received does not quite match the message sent. Such disparities are fuel for interpretative debates, but they also speak directly to form: how should judgments account for emojis, if at all?

Let us imagine a case turning on the interpretation of a text-message conversation. The exchange is punctuated with emojis. If the emojis are not determinative, can they simply be omitted as if they were absent from the transcript from the start, or should there at least be some sort of indication that “emojis were omitted” as we sometimes see “references omitted” or “typos were corrected?” Conversely, where the emojis are relevant to the reasoning, that is if they add to the message or help to interpret it — e.g., if they suggest some cordiality or tension between the interlocutors, if they indicate irony or, on the contrary, buttress an intention—, how should they be included?

Should their description be “written,” following the judge’s interpretation thereof or should they be reproduced? In the latter case, is it better to encode them as characters — which is lighter, could possibly become a research keyword[4] but which carries the risk of conflicting displays — or rather to “paste” them as images, thus ensuring they will appear in the judgment exactly as they appeared into the evidence? Consider these screenshots of the same conversation in R v Ukpebor, 2019 ABQB 261, para. 25 viewed from two platforms:

See also this excerpt from the case R v. D.C.R., 2017 BCPC 80, para. 18, where the emojis have been inserted as images and where they are described in brackets:

The emojis here are not only reproduced, they are also described, no doubt that which reflect the judge’s interpretation. Interestingly, the faces “with tears of joy” match the Unicode-description; those “with tears” do not (the Unicode rather described them as being “loudly crying”).

And indeed, electronic communications are characterized by their speediness: it seems therefore wholly unrealistic to expect users to check how the data sheets of an international organization describe the emoji they are about to send –especially since the Unicode itself changes its descriptions to reflect the actual or reported usage of users! Here, emojis are an illustration of what has been said elsewhere: the Internet can be a palimpsest.

Challenging, but not insurmountable: join us on October 18, 2019 at CIAJ’s Annual Conference to discuss the impact of such technological change on the rules of evidence. <

[1] The author will address at the Annual Conference of Canadian Institute for the Administration of Justice. An expanded paper titled “Say it with [A Smiling Face with Smiling Eyes]: Judicial Use and Legal Challenges with Emoji Interpretation in Canada” has been published in the International Journal for the Semiotics of Law (available here).

[4] Though this is not technically infeasible, currently, emojis and signs such as dollar signs or the pound key cannot be used as a keyword for a search in the main Canadian legal databases. 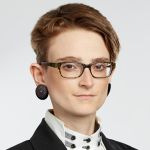