“Plus ça change”…: The Record on Judicial Review

Although judicial review in Canada has undergone a significant shift in the past decade, the rules governing evidence admissible on judicial review have not been changed in any meaningful way since the 19th century. Those rules, generally speaking, still limit the admissibility of so-called “extrinsic” evidence to situations involving alleged ‘‘jurisdictional errors” or a breach of the duty of fairness.  However, particularly since cases like Dunsmuir (Dunsmuir v. New Brunswick, [2008] 1 S.C.R. 190, 2008 SCC 9), and Doré (Doré v. Barreau du Québec, 2012 SCC 12, [2012] 1 S.C.R. 395), the grounds upon which decisions may be quashed on judicial review have expanded, and reviewing courts now must consider the facts and circumstances underlying a decision under review, as well as their impact on the Charter interests of a party challenging a decision.  When this more expansive role for the court on judicial review is combined with restrictive evidentiary rules, it can lead to circumstances where parties are not practically able to make the arguments that they would otherwise be entitled to make on review, and the task of the reviewing court can be frustrated. Any manner of administrative decisions, and not just those from adjudicative or quasi-adjudicative tribunals, are subject to substantive judicial review, and the issue of “what is the record” is increasingly a live one, particularly when non-adjudicative or policy decisions are under review.

We have tackled this problem from the perspective of users of the administrative law system. Operating from the thesis that the rules of evidence on judicial review should move in tandem with changes to the substantive law of judicial review, we have proposed a general rule permitting parties to adduce evidence necessary to the arguments they are permitted to make, subject always to the courts’ discretion to exclude such evidence where there was a meaningful opportunity or expectation that the evidence be put before the decision maker at first instance.

In practice, this means that in cases where there are full natural justice protections and a meaningful opportunity to adduce evidence, there will be little justification for adding “fresh evidence” on judicial review. However, in a wide variety of circumstances – where a less robust decision-making process is in place, where a party seeking to challenge a decision had no meaningful opportunity to put relevant evidence before the decision maker, or where the decision-maker failed to properly inform itself of facts and circumstances that should have informed the decision making process – there should be greater latitude for the admission of evidence to establish that the decision maker has, for instance, acted unreasonably or without regard to relevant constitutional rights and values. While obviously courts need to be alert to the fact that a judicial review is not a trial de novo, that doesn’t mean that the courts’ task should be bedeviled by outdated rules of evidence based on a conception of judicial review that has long since lost its currency.

The disconnect we have identified between the arguments parties are entitled to make on judicial review, and the rules of evidence that undermine or foreclose their ability to advance those arguments meaningfully, can be closed in other principled ways. This includes, for example, by narrowing the grounds upon which a party can challenge administrative decisions, or by expanding the content of procedural fairness for non-adjudicative decisions. Our primary point is that if changes to the relationship between evidence and judicial review are to occur, they should be made on a principled basis, and not one where the substantive arguments on review are technically available, but the rules of evidence make it practically impossible to advance them.

Ms. Wihak and Mr. Oliphant will participate in CIAJ’S next National Roundtable on Administrative Law:
“These are the Principles, If You Don’t Like Them, We’ve Got Others”
Saturday, May 27, 2017, 8:15 am to 4:00 pm │ Sheraton Wall Centre, Vancouver 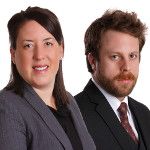 Lauren J. Wihak joined McDougall Gauley LLP, where she specializes in administrative law, municipal law and litigation. Ms. Wihak received her Juris Doctor from Queen’s University and holds a degree in Communication and Psychology from the University of Ottawa, where she was awarded the Silver Medal for her studies in Psychology.

Benjamin Oliphant practices in the Public Law and Labour and Employment Litigation Groups at Gall Legge Grant Zwack LLP, where he focuses on constitutional, administrative and labour law matters. Mr. Oliphant graduated with honours from the University of Toronto Faculty of Law, where he was the recipient of the Warren K. Winkler Prize in Labour and Employment Law and the Alexander C. Pathy Q.C. Prize in Labour Relations Law.