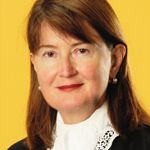 The Honourable Georgina R. Jackson was appointed to the Court of Appeal for Saskatchewan in 1991. For 10 years beginning in 1997, she was a Director of the International Association of Women Judges. The sole associate judicial director of the National Judicial Institute from 1998 to 2004, she also served on the Law Reform Commission of Saskatchewan from 2009 to 2015. She continues to be a director of the Canadian Superior Court Judges Association and a member of the Annual Review of Insolvency Law.  Justice Jackson has been elected to a two-year term as President of CIAJ in October 2015. Her involvement with the CIAJ is part of a longstanding commitment to provide service to the administration of justice as a volunteer – apart from her work as a judge and lawyer.